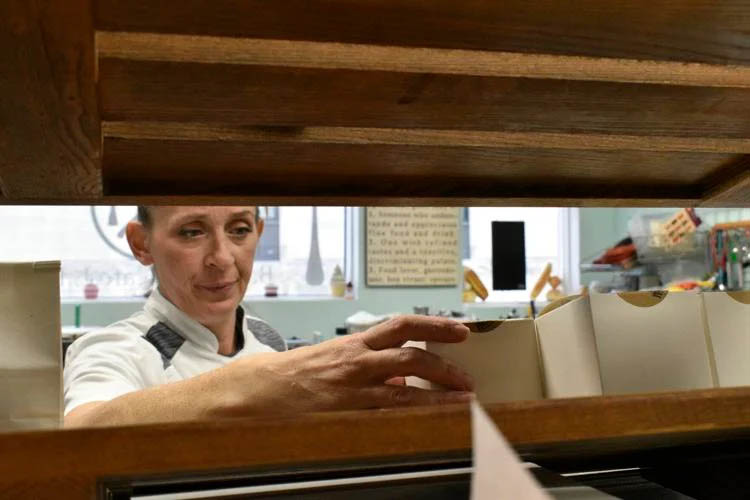 New Downtown Kenosha bakery opens its doors to the public

A new bakery serving everything from soup to cinnamon rolls has opened in Downtown Kenosha. Run by a mother and son duo, From Scratch Bakery & Café is located at 815 57th St.

Bakery owner and Kenosha native Tina Frank starts her day sometime around 2 a.m., preparing the variety of pastries and sweet treats From Scratch offers. Those include cookies, Danishes, croissants, muffins and more. Additionally, the bakery and café offers freshly made baguettes and a rotating menu of soups.

The business, originally operating out of Frank’s house before acquiring the downtown location, opened Nov. 28.

From Scratch Bakery is situated diagonally opposite of Civic Center Park, just behind The Stella Hotel & Ballroom.

Dominic Frank, Tina’s 19-year-old son who works full-time at the bakery, said he became interested in cooking a few years ago, after growing up watching his mom bake. He talked about the reactions he saw as people came into the small shop.

Tina Frank said she’s been overwhelmed by the positive reaction from customers. Even beyond friends and family, adding things were going better than anticipated, admitting that she had been nervous with the “big leap.”

“This is just a dream. I have no words for it. I’m so humbled and grateful for it,” Tina Frank said. “You never know for certain, you’ve just gotta believe in yourself and take that leap, which is terrifying.”

This was no half-baked plan, however. Tina’s father was a baker at several local bakeries, and she’s been in the food industry in some form or another since she was 15. She’s been offering her baking services for several years, working in borrowed kitchens. But a brick-and-mortar bakery was always part of her long-term plan.

“I’ve been around it for a long time,” Tina Frank said. “This is what I do, and I want to share it.”

One of her hope with the location, just a short walk from the county courthouse, Post Office and more, is to offer a local place for area workers grabbing a quick meal.

Read more at the KenoshaNews.com.